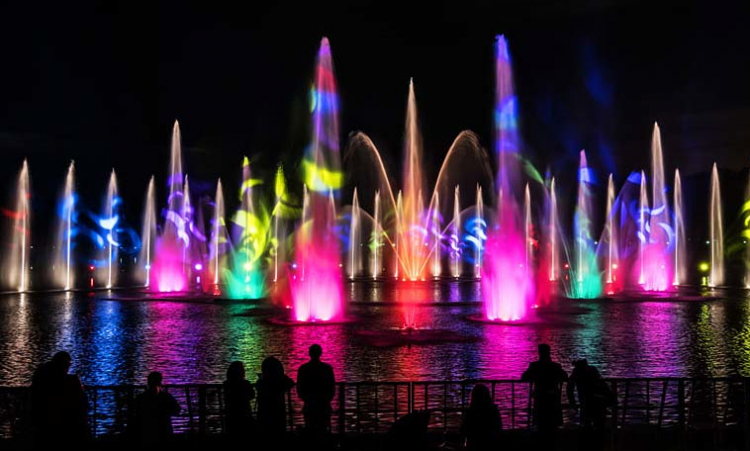 for a musical fountain design

Musical features tend to be complex and require a degree of mechanical, hydraulic, electrical, and electronic components beyond sight that can impress an audience as much as the show itself.

With Universal musical fountains, the sequences and water effects are random. They depend on the high, medium and low frequencies of music played on a CD or other musical support. These fountains have the advantage that they adapt to all styles of music without any adjustments to the analysis and control systems; that is, there is no programming.

Programmable Musical Fountains make it possible to create a tailor-made sound and light show. The results live up to your expectations perfectly and are amazing. Here the groups of jets are synchronized with the music via a software program for you. This software drives the pumps and lighting, thus creating water effects that match the music of your choice. Remote control of a Programmable Musical Fountain is possible from a PC via the internet.

In general, water fountain shows are a draw for tourists because seeing the water dance to the music's beat and playing with the lights makes visiting these fountains an experience. Unique. Observers can enjoy the nighttime show, perfect for cooling off on hot summer nights or for a walk on a winter afternoon.

These fountains are also versatile as they can be integrated with other arts, such as concerts or landscape painting, creating an interdisciplinary spectacle that attracts even more audiences. In short, this combination gives this place a distinct and distinctive appeal, which seeks to manifest greater potential in cities.

The music in fountain shows are often more classical, giving the impression that the water is dancing ballet. But lately, modern music has also been incorporated to grab the younger generation's attention and turn these fountains into performances for all ages.

Water fountains for a musical fountain design can also be used to beautify an area or place. It can help create a natural atmosphere in public parks and gardens. It derives from the aural and visual aesthetic of utilizing one of nature's most precious resources: water.